Having all trundled down to London under our own steam, we met dark and early at 4am for our sunrise flight. Having successfully negotiated check-in without any major repacking emergencies to meet weight limits we had time for a leisurely breakfast (complete with G & T for some!) before our flight.
My fears of our transfer in Lanzarote being a couple of tiny minibuses proved unfounded and after a comfy ride on a spacious coach we made it to the accommodation in Costa Teguise without incident and had the afternoon to explore/hit the beach/nap before diving the next day. 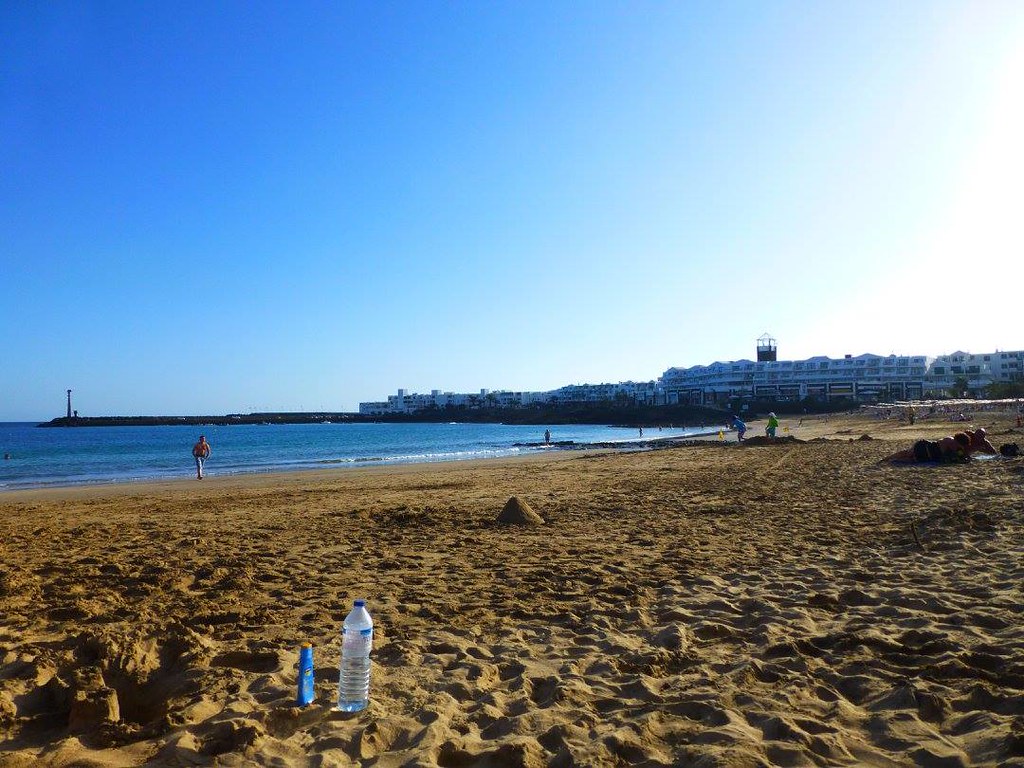 Diving Day 1:
For the first days diving we hit up Playa Chica (Lady Beach!). This was a site with a large number of possible dives from the same entry point, and as we were going to be there for a few of the days we had a couple of guided dives with the guys from the shop so we all had a chance to get our bearings and learn where the interesting stuff was. This was also an opportunity to check out weighting and other such divingy things as we were diving with some non-SUSAC standard 12L (or 10L if you’re a Catfish) tanks and some of us were taking the bold step of not wearing an undersuit in the 20 degree water. I was pleased to discover I had got my weighting spectacularly wrong, and on descending crashed to the bottom and only managed to approximate neutral buoyancy by putting so much air in my suit that I resembled a soggy Michelin Man. Despite this the dives were good: trundling around as a large group of underwater SUSAC was quite fun, the mass confusion when Grande Raymondo went rogue and did a swim through being saved for later in the week was quite amusing and seeing an angel shark on the first day was great. There was a juicy subplot to the surface interval as Tom discovered that someone had eaten his sandwich, which at the time was seen as a malicious and hostile act as the sandwich bag had clearly said “TOM” on it. Investigations were made, suspects and witnesses questioned, but by the end of the day the sandwich thief remained at large.

Diving Day 2:
For Alice’s day in the dive management hotseat the group was split, half going out on a boat to do some wreck diving on the Old Habour wrecks and half returning to Lady Beach.
I was in the boat half and we were pleasantly surprised to find ourselves on a large hard boat with a proper toilet, large kitting up area and a comfy sun deck. After the 30 second cruise around the harbour wall we arrived at the dive site. Apparently during WWII a number of boats were purposefully sunk in the old harbour entrance to keep out the baddies. With the construction of the new harbour these wrecks were now outside the harbour entrance and were spread out over a range of depths, with the first wreck at about 18m and with the deepest down near 40m. The two dives we did here are possibly my favourite two ever.
For the first dive Quentin and I had managed to nab some 15L tanks and took full advantage of the extra gas and the brilliant vis, having a good poke round 4 different wrecks on our way down to 35m and back, via some nudibranch out on the sand that Quentin spotted. After a very chilled out surface interval of coffee and cake, Tom and I headed back in. After a quick stop at the Nudibranch (Tom’s plan of hiding them so Quentin couldn’t take any more photos of them was spoiled by how many of the things there were!) we went down to our max depth for the dive and chased our no deco time back up to the shot, passing the best preserved of the wrecks on the way. 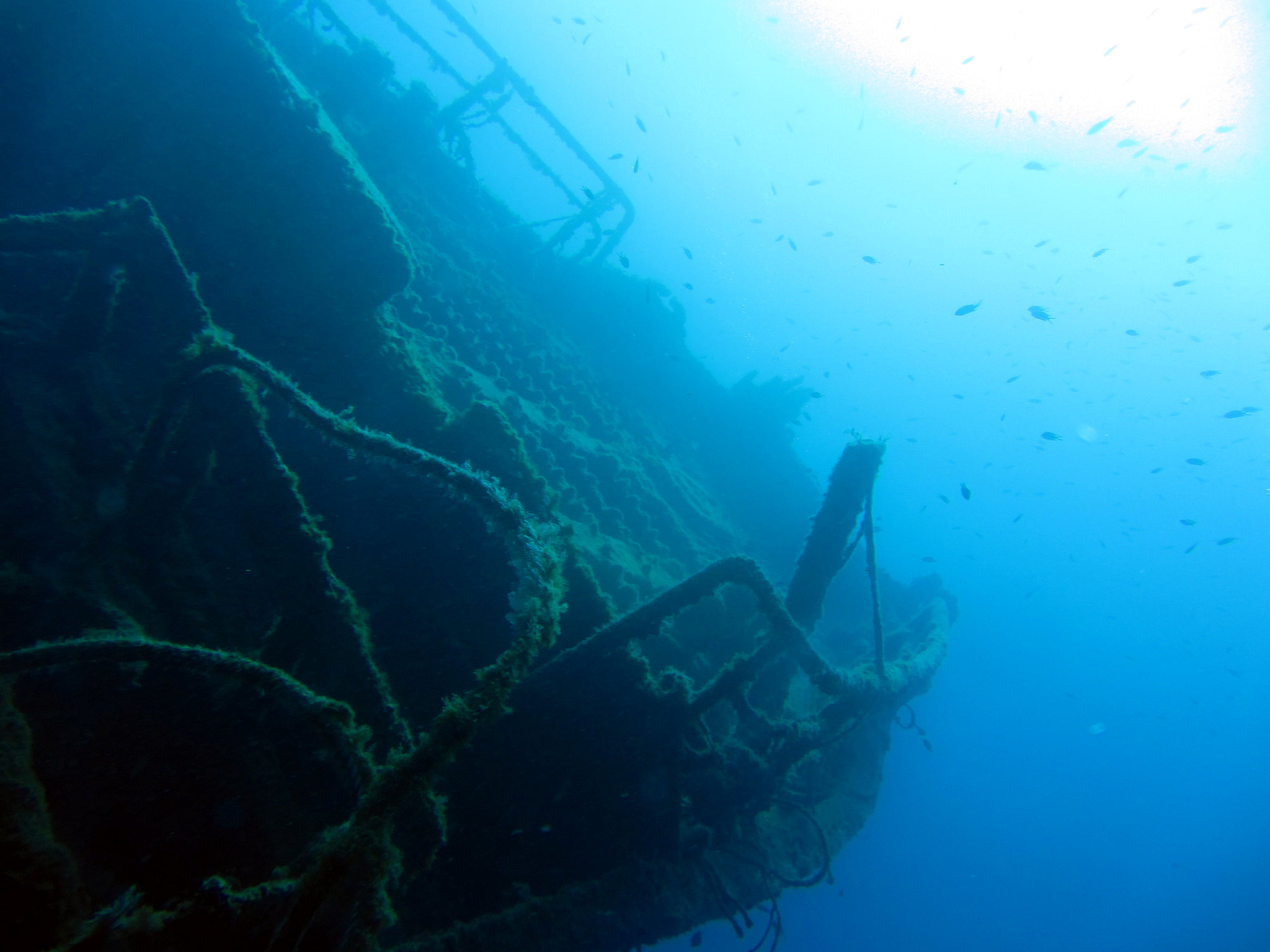 Diving Day 3:
Emily was in charge as the groups from the previous day swapped sites, so the boat crew from the previous day were back to Lady Beach with the plan of doing the Blue Hole and then having an explore.
These dives were much the same as the first days dives. Amy and I somehow managed to go through the Blue Hole backwards, so as we came up through it we were greeted with a SUSAC traffic jam at the top as everyone else waited for us to come up so they could go through. The navigation on our second dive went perhaps even less well. We’d planned on following the reef down to a little wreck and then back. What we actually found was some sand, a bit more sand, and a current taking us in the wrong direction. Through luck more so then my navigational skill we managed to make our way back to the correct exit point, passing Chris and Emily on their way out on what was apparently a similar dive!

Diving Day 4:
Milla took command for our penultimate day. The first dive was at the Temple Hall wreck. This was a cargo ship that had been beached during a storm (I think…) and when it had been re-floated had snapped in half, leaving the rear end sitting proud out of the water and the front half sitting in about 10m of water. After wading in and a short surface swim, Phil and I initially had an explore of the partially submerged engine room, enjoying the opportunity to do some proper wreck penetration whilst still having a clear surface and only being at 6m. It was in a dark scary corner of this section where we were ambushed by Tom brandishing J3’s Humane Wildlife Botherer, otherwise known as the tickle stick. The rest of the dive swiftly turned into an underwater couples roadshow, with sickening cuteness, ridiculous underwater hugs and an underwater-above-water-underwater domestic witnessed by all.
The second dive of the day was a night dive, so there was plenty of time in between dives for a leisurely lunch and some time on the beach before heading once more to Lady Beach. Alice dished out the glow sticks, and looking about as prepared for a rave as anyone in SUSAC is ever likely to be, we made our way to the water to see if anything interesting had emerged for the night. Thankfully it had, and Phil and I had a great time chasing cuttlefish, generally kicking up sand into Chris and J3’s path (accidentally!) and spotting a baby Angel Shark. The exit via the beach gained a little bit of a night time smugglers vibe, with Josh reporting having “IDENTIFY YOURSELF” yelled at him across the bay by Alice as he surfaced.

Diving Day 5:
For the final days diving I was the boss, and we were off to Playa Flamingo (Flamingo Beach). This site was at the other side of the island and our route there took us through some of the stunning scenery of the national park in the areas around the volcano.
Flamingo beach is an artificial beach which shelves swiftly down to about 18m, with huge shoals of fish near the entrance to the artificial bay. This site seemed to produce marmite dives, with some seeing the square root of naff all and some seeing quite a bit of interesting stuff. Thankfully my dives were in the interesting stuff category. For the first dive I was with Alice and after a slight mishap of the navigational variety, we successfully made it out of the bay and the poor visibility and into the large shoals of fish. After spotting a couple of barracuda we dropped down to the bottom and began Angel Shark hunting. Whilst we didn’t find any sharks, finding a ray and a few cuttlefish made up for it and the amusement Alice seemed to get from pointing at stuff that looked just enough like a shark/ray/cuttlefish/octopus and getting me to poke it only for it to be a rock made this a particularly funny dive. Following the mixed successes of the first dive, Gareth and Quentin made the decision to go beer diving instead of sea diving and took themselves off to the bar overlooking the beach.
For the second dive everyone took the sensible decision to surface swim out of the bay before descending, in an attempt to avoid the worst of the visibility. For the second dive I was with Emily and right away we were treated to seeing a trumpet fish. The quest to find Angel Sharks continued and after a small miscommunication (Emily was gesturing angrily and I thought it was about me. She assures me it wasn’t!) and another close encounter with J3 and his tickle stick, we successfully found not one but two dozy Angel Sharks, and as we scuba-danced our way back to the beach we spotted my first eel! It was (for me at least) a great end to the weeks diving. 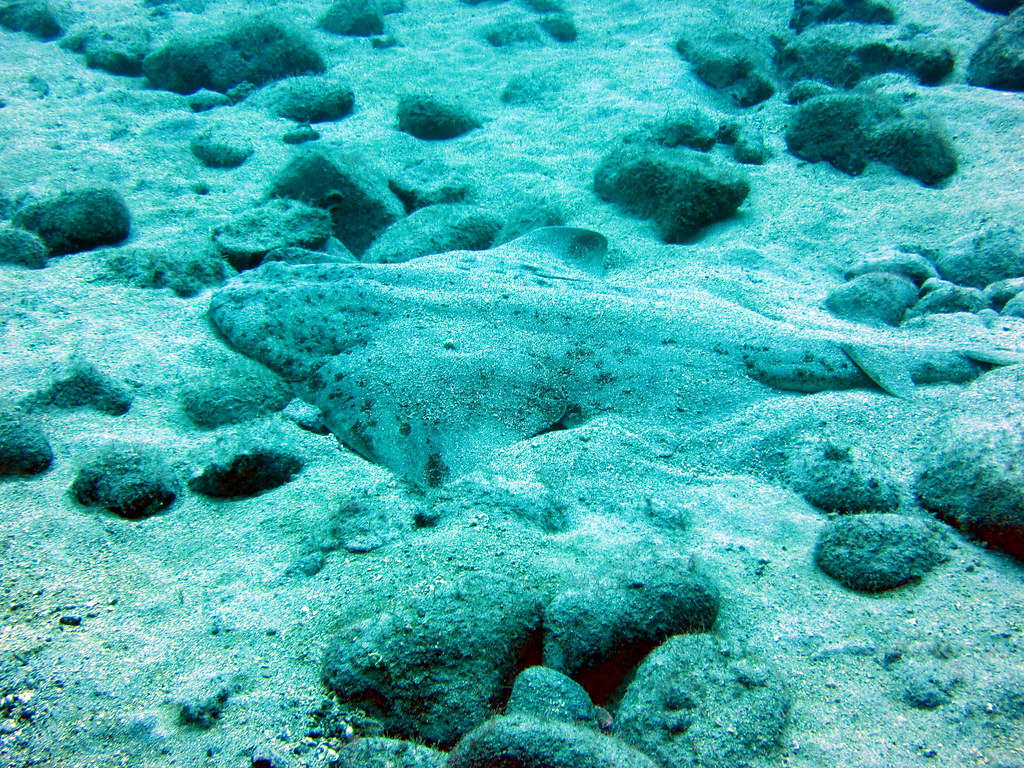 Fun Day:
For the free day we had before jetting off back the UK SUSAC went go karting, which was about as hilarious and terrifying as you might expect.
Ross and Laura had managed to negotiate a group deal with the local go kart track for a Grand Prix event, featuring a series of races and a full on champagne podium ceremony. J3 kept the crowd entertained with some daring overtakes whilst some – myself included- pootled around quite happily at sensible speeds. Congratulations to Quentin and Phil for being the eventual winners, with J3, Milla, Gareth and Alana also ending up on the podium.
After kit washing and some more time at the beach (J3 and I aren’t very good at Bat and Ball) it was time for the final night dinner and then the Lanzarote edition of the Port Awards. The award criteria were many and varied but highlights included Phil recieving the Bocadillo Bastard Award for Sandwich Sneakery (for being the guilty party in Sandwich-gate from the first day), Alice receiving the Jeremy Kyle Award for an Underwater Domestic, Ross receiving the Floater Award for Being a Forgetful Poo and Viki recieving the Birds Eye Award for Being a Right Good Catch, referencing her experiences with a fisherman during the night dive! 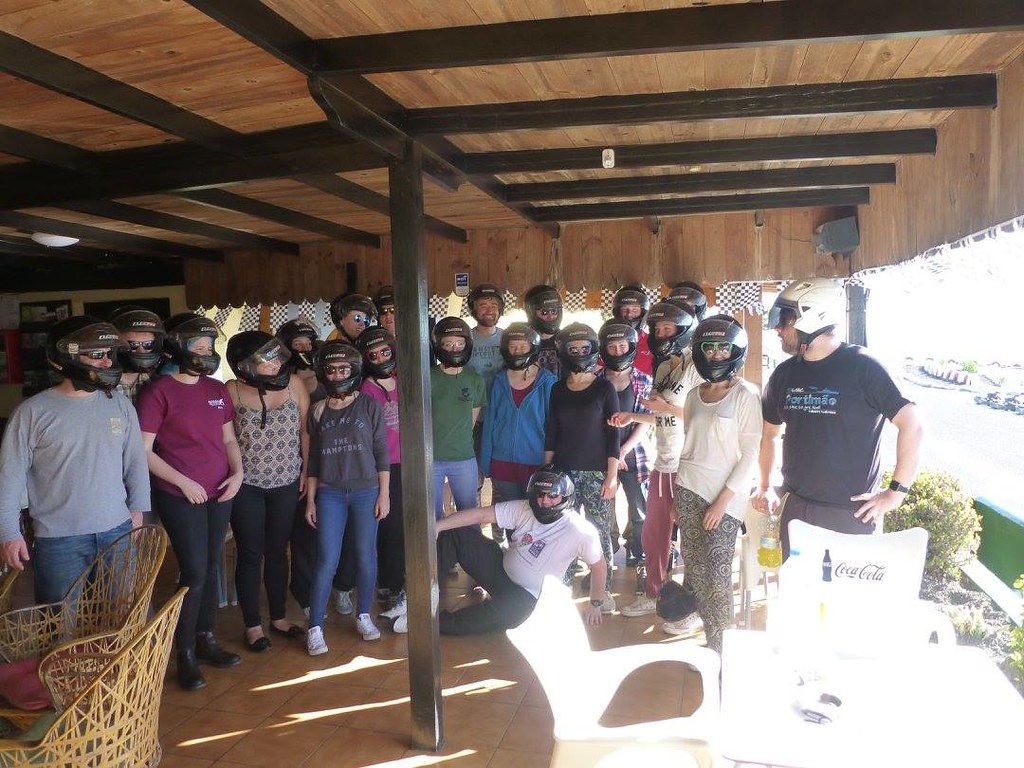 The trip home was mostly uneventful once we managed to reach the airport (thanks to Emily for becoming a sassy Spanish lady and sorting out the bus drivers!) and we all got back to Gatwick safe and sound, if a few hours later than expected!

Thanks to:
Tom and Ross for running a DPM course and dive managing the first day, Milla, Alice and Emily for also dive managing, Emily again for being able to speak Spanish to sweary bus drivers and to translate “Macerated Shark” into English, Phil for driving a van, Alana and her bank manager for having a big enough credit limit to pay the dive shop, the Port Awards Team and to everyone else for making this a really fun trip!