On our recent trip to Gozo we were pleased to see some fellow BSAC members on the tiny island in the form of Clidive. Due to the weather during our time there (rather windy) we were quite limited on choice of dive sites and for this reason we quite often ended up at the same place as Clidive. It was a pleasure to meet some fellow divers and apparently they thought the same! They recently sent an email to thank SUSAC and even sent a letter to SCUBA magazine which you can find in this months issue (August 2015)

SUSAC, you’ve done yourselves proud! Here’s what Clidive had to say: 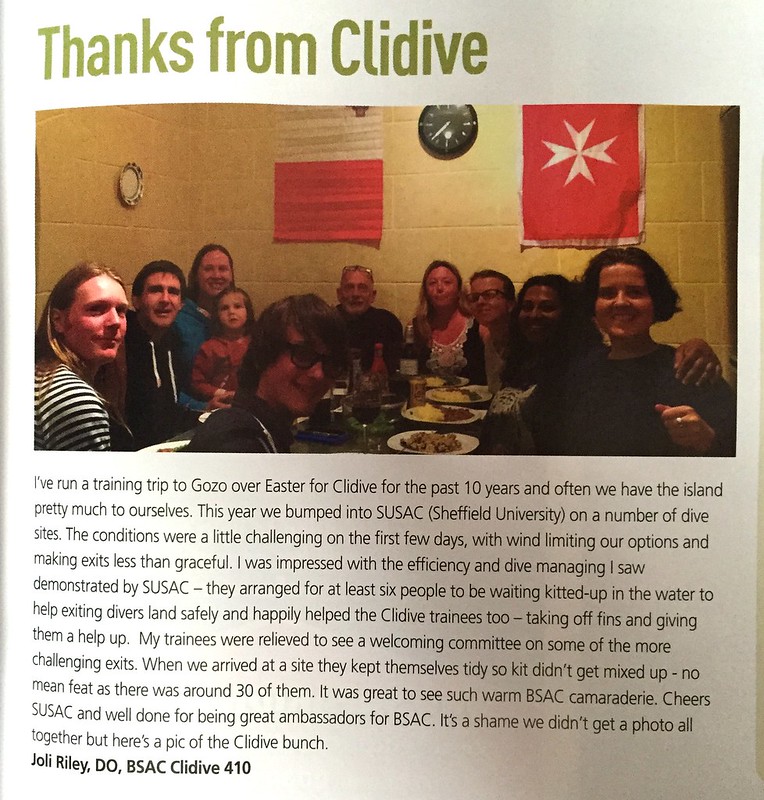 “I’ve run a training trip to Gozo over Easter for Clidive for the past 10 years and often we have the island pretty much to ourselves. This year we bumped into SUSAC (Sheffield University) on a number of dive sites. The conditions were a little challenging on the first few days, with wind limiting our options and making exits less than graceful. I was impressed with the efficiency and dive managing I saw demonstrated by SUSAC – they arranged for at least six people to be waiting kitted-up in the water to help exiting divers land safely and happily helped the Clidive trainees too – taking off fins and giving them a help up. My trainees were relieved to  see a welcoming committee on some of the more challenging exits. When we arrived on site they kept themselves tidy so kit didn’t get mixed up – no mean feat as there were around 3o of them. It was great to see such warm BSAC camaraderie. Cheers SUSAC and well done for being great ambassadors for BSAC. It’s a shame we didn’t get a photo all together but here’s a pic of the Clidive bunch” Joli Riley, DO, BSAC Clidive 410