Where: Marsalforn, Gozo, Malta, Middle of the Mediterranean Sea

How many: 36 people, 35 divers of all ages and experience.

Cost: £537 including airport transfers, flights, accommodation and all dive gear.

29 of the 36 people on the trip were on the overnight flight from Manchester arriving and Malta at 2:30am. From here we grabbed a coach to the northern point of Malta island to catch the Gozo channel-crossing ferry. Unfortunately due to a delay in the flight and some closed roads, we arrived at the harbour just in time to spot our ferry leaving. The 29 of us were then stranded for the next 2 hrs waiting for the next early morning ferry. As a result the sun had risen by the time we finally arrived into Marsalforn. While waiting, a group of us decided playing s***head was the best way to pass the time. Quentin had a different idea and decided to distract SUSAC by pulling out a set of ‘pillow talk’ cards.

After everyone managed to grab a few hours sleep we were all up and off to the shops to get supplies. After a few additional hours of sorting kit and collecting keys for our fleet of 6 “fun” Jeeps and 2 pickups we had our first dive briefing of the week by our lovely DO.

With a northerly wind we set off for our first dive of the week to Mgarr Ix-Xini bay, a well protected cove with a max depth of around 12m and some interesting caves.  Some divers managed to start the week well, with Seahorse sightings.

Unsurprisingly with the delayed start to the day and the inevitable first days faff the second wave of dives quickly turned into the weeks first night dive. The final jeeps managed to escape the site just as the sun was setting. After unloading all the kit and tanks into the dive centre we all had our first debrief of the week in Atlantis flat 3 along with the traditional Port-O’clock. As a result of the early supermarket closing we ended up with some lemon flavoured “port” (Limón cello).

Even though the wind had now shifted to a light southerly the northern coast was still out for diving. Unfortunately due to the wind shift we were unable to dive the main site at Red Bay so we moved slightly to the east into a sheltered bay. For my dive here we had aimed to hit 25m for depth progression so we jumped in and went in search of deeper waters. After a good swim we managed to a total of 13.5m. The reef did at least, in some part, make up for the lack of depth.

This was the first “pick your own depth” dive of the week so many of us dived down the middle finger’s column to our max depths. With the excellent vis even those limited to 20m were able to spy out the join between the shaft and mainland at 28m and even see the drop-off to 50m plus.

The day had a fantastic start with everyone packing and leaving for the dive site ahead of time. This quickly deteriorated when the jeep I was driving appeared to run out of fuel. Steve arrived shortly after our breakdown but was unable to assist. Eventually the dive centre arrived to give assistance with a barrel of diesel. With a filled tank we headed to the dive site to arrive to SUSAC in full faff mode.

After all our divers were back on dry land and my neck seal had split, the white pick-up set off on a tank run only to appear to run out of fuel again… With the recent addition of fuel to the pick-up it became apparent that there was a different problem.

The afternoon diving went with more smoothly starting with Monty using a new, surf style slide down the slipway, entry method. After the dive and all the Jeeps were loaded the white pick-up decided to have another grump. Thanks to John we found a solution – lifting the bonnet and pumping the primer to get the engine running again. We limped back having to stop, jump out and repeat the primer process every mile or so.

With the weather blowing up, Mgarr was the only choice for the day. Diving went smoothly with most divers exploring the cave and the edge of the bay.

Instructors were occasionally paired together for ‘fun’ dives. For this dive Steve and Stewart decided to ‘dive’ the beach shack restaurant instead of entering the water. They, along with many others, were able to witness Kate L doing her rescue lesson. Even with the pressure of being watched Kate managed to, in her instructors words, smash the rescue.

After staying for the whole day at the site we all sat down for an evening meal in the beach side cafe before kitting up for a night dive. With glow-sticks attached and torches on we went off in search of some exciting sea life. As I was in a chilly wetsuit we ended up swimming at a reasonable pace spotting many sea snails and flying gurnards. Some others were lucky enough to discover cuttlefish, octopus and even sea-horses. After changing and stealing clothes off various members of SUSAC, including Cat’s hoodie, I was able to sit and watch the searchlights sweeping around the bay. 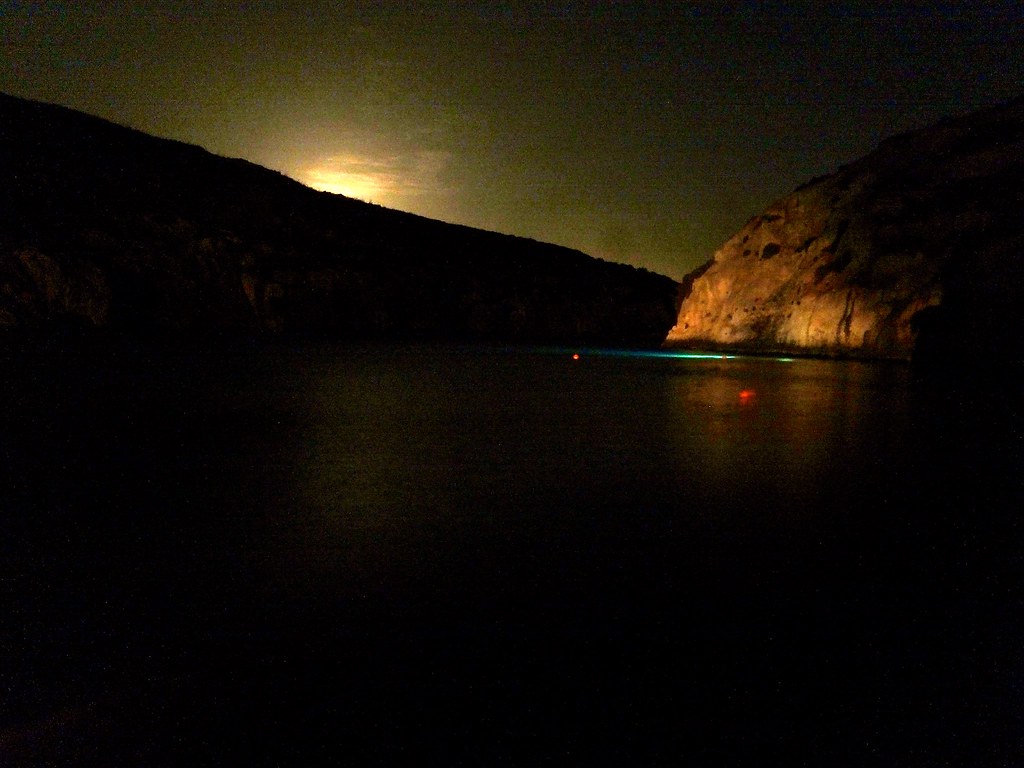 With an early start after a late night, SUSAC surprisingly managed to arrive at the boats at the correct time. Once loaded onto the boat we set off for the little island of Comino. This ex-service patrol boat was sat on a 21m deep seabed. From the moment we jumped out of the boat the whole wreck was visible and was quickly covered with divers entering and exiting every orifice possible. The excellent visibility even allowed some of the less experienced divers with us to enter some of the ships many holes. 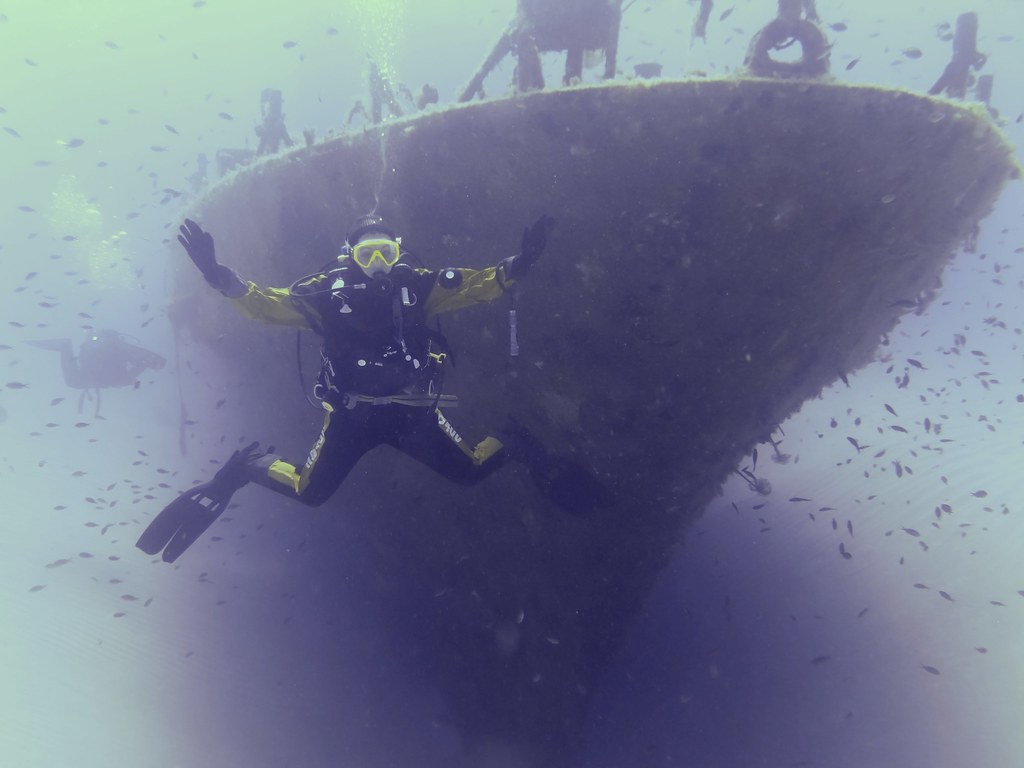 With most peoples only wreck dive of the week completed the second dive was Lantern Point. This was a reef shelf down to 20m, which then dropped off to 50m. There was also a tunnel/chimney that lead from 17m back up to 5m. Some of the divers managed to find the tunnel while the rest of us just explored all the reefs nooks and crannies. 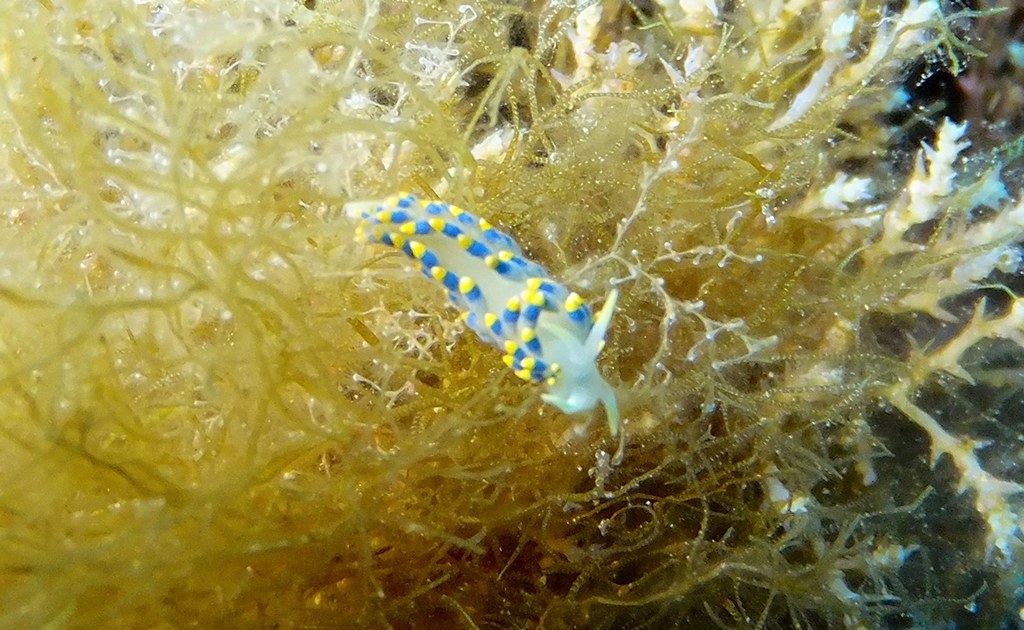 Many of the divers on the larger boat all managed to congregate around the anchor of the boat for the second dive to be entertained completely by the cuttlefish that Jenny had located.

The final day we managed to sneak back to Xatt L’Ahmar. This time the weather allowed for diving on the main reef. With the high ledge above a small overhang the entrance method chosen by most was to jump off backwards landing on our tanks. This quickly turn into a style competition. Shin scored highly with his perfect pointed fins and ability to hover mid-air for a prolonged period. Ross’s second entrance was a little more questionable. After spending many days trying to relocate his fin from the SUSAC ether, he decided to throw the fin in first before following with a one fin giant stride. Most of the divers descended on the wall which dropped off from 8m into the blue while other divers swam out to the wrecks whose deck was at 35m. I attempted the wreck however after being blown off course on the surface the dive turned into a blue water swim at 20m. After 10 minutes of seeing nothing we turned round and swam back managing to find the wreck on the return to the shore. Unfortunately by this time the air supply left in our 12 L tanks was not enough to get down on the wreck. We descended to 30m and took a look around the deck from a distance. So close but yet so far. 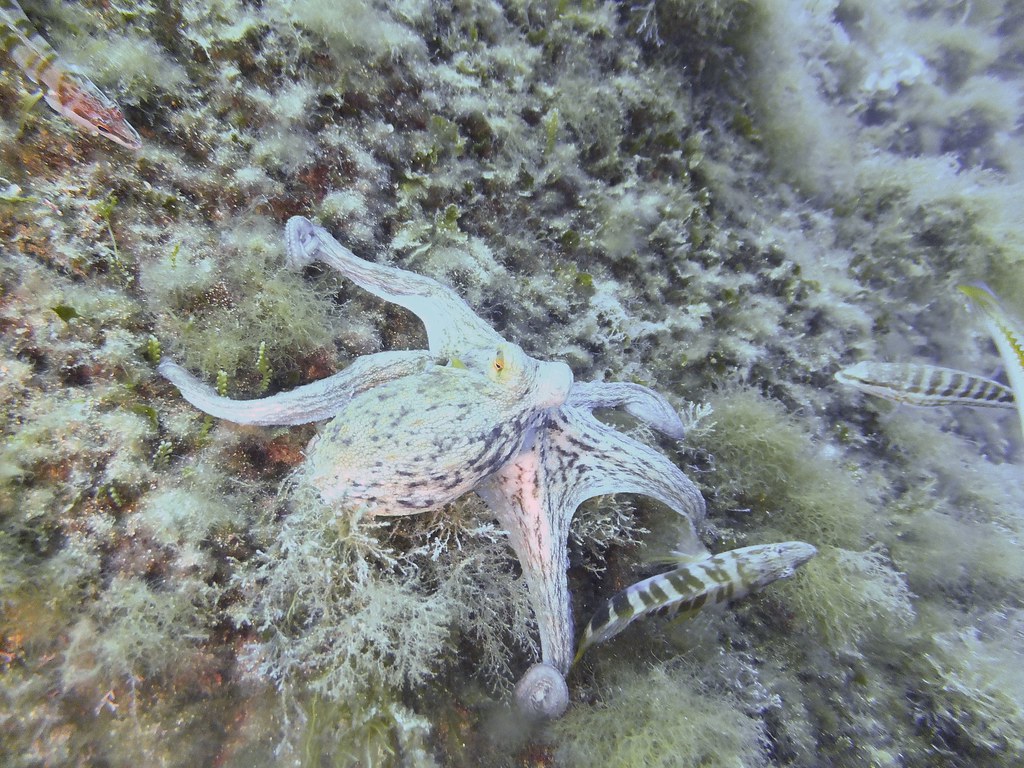 The last dive of the day and trip, for me, was perfection in many ways. Learning from the mornings dive we entered and headed straight to the wreck. After hitting the mark straight on we then spent 8 whole minutes swimming through the wrecks upper deck area with our computers depth alarm (set to 34m) bleeping away at us. After exploring all the areas above our depth limit we swam off back to the wall just behind Ross and his buddies. Next to them we spotted what we thought was a cuttlefish which turned out to be an octopus. We remained here for the remainder of the dive before ascending to 10m, deploying a turgid DSMB, holding a 3 minute safety stop before surfacing right on the exit point dead on the 30 minute total dive time limit. It later turned out my buddy managed all this even though she had a broken thumb!

We ended the trip with the traditional Easter trip meal along with some typical port awards that were awarded by Laura. Along with these ports, two special t-shirt prizes are given out. Firstly to the ‘Star Diver of the week’ which Kate L won for her great diving and smashing rescue. Muppet of the week had many nominees. With no small number of entries the prize went to Stephan. He had to be told by the non-diving skipper that his BC clips were un-done. After correctly attaching his BC he then proceeded to enter without a reg. Later in the same morning Stephan decided he would remove his neck seal without first being unzipped. Dive manager hats were awarded and then the group moved on to smugglers bay. There were additional prizes for Doctor of the week (Dave) and Driver of the week (Josh) for giving up so much of their time during the week to help others. Along with the awards and the port you were also given a Ross hand-shake and or hug/kiss by Laura. For Jack and Jack, who received the honorary Paul Snary lifetime achievement award for being tall and ginger, each others allure was too great, resulting in Laura missing out.

The walk home involved a short cut through one of the many, identical looking garages and finding the correct one took many attempts. Everyone managed to make it home and find a bed, even if it wasn’t their own. The next morning was massively helped by Gerd’s fantastic Gerdcakes! This was only hindered by someone not being able to find the keys to the white pick-up, which needed to be returned. These were later located in the restaurant from the night before. With kit and jeeps all packed or returned and all the Gerdcakes eaten, SUSAC departed for the long journey back to the UK after an eventful but successful week.

Thank you to everyone who organised and came on this trip, here’s to the next one!